13 Characteristics of the Most Influential People

Hadley’s Intro: See why I swish this oil like mouthwash every day, and I also use this oil to “bulletproof” my coffee each day. Bulletproof your health in two simple steps you get in this guest post from America’s wellness expert–

Coconuts are among the most nutritionally dense foods on the planet and have been a dietary staple for millennia. Western science is now “playing catch-up” to what natives of tropical regions have known for thousands of years. One of the reasons coconut is so special is that it’s a natural antimicrobial food.

Coconut, especially its oil, is a powerful destroyer of all kinds of microbes, from viruses to bacteria to protozoa, many of which harm human health.

Researchers at the Athlone Institute of Technology’s Bioscience Research Institute in Ireland set out to test coconut oil’s biocidal properties against the bacteria responsible for tooth decay.

Dental caries is a commonly overlooked problem affecting 60 to 90 percent of children and the majority of adults in industrialized countries, according to chief researcher Dr. Damien Brady. His research team tested the antibacterial action of coconut oil in its natural state and coconut oil that had been treated with enzymes, in a process similar to digestion.

The oils were tested against strains of Streptococcus bacteria, which are common inhabitants of your mouth.

They found that enzyme-modified coconut oil strongly inhibits the growth of most strains of Streptococcus bacteria, including Streptococcus mutans, an acid-producing bacterium that is a major cause of tooth decay1. It is thought that the breaking down of the fatty coconut oil by the enzymes turns it into acids, which are toxic to certain bacteria.2 Enzyme-modified coconut oil was also harmful to the yeast Candida albicans, which can cause thrush.

“Incorporating enzyme-modified coconut oil into dental hygiene products would be an attractive alternative to chemical additives, particularly as it works at relatively low concentrations. Also, with increasing antibiotic resistance, it is important that we turn our attention to new ways to combat microbial infection.”

The work also contributes to our understanding of antibacterial activity in the human gut, which helps maintain the balanced flora necessary for a strong immune system.

“Our data suggests that products of human digestion show antimicrobial activity. This could have implications for how bacteria colonize the cells lining the digestive tract and for overall gut health,” explained Dr. Brady.

The Many Health Benefits of Coconut Oil

Coconut oil offers an impressive array of health benefits. In addition to its antimicrobial properties, coconut oil is beneficial for:

One of the primary reasons coconut oil’s benefits are so broad is that 50 percent of the fat in coconut oil is lauric acid, which is rarely found in nature. In fact, coconut oil contains the most lauric acid of any substance on Earth. Your body converts lauric acid into monolaurin, a monoglyceride that can actually destroy lipid-coated viruses such as HIV and herpes, influenza, measles, gram-negative bacteria, and protozoa such as giardia lamblia.

Another of coconut oil’s antimicrobial components is capric acid, present in lesser amounts.

Coconut oil is also comprised of medium chain fatty acids (MCFAs), which are smaller than the long chain fatty acids that are much more common to vegetable and seed oils. MCFAs are easily digested and readily cross cell membranes, and are sent directly to your liver, where they are immediately converted into energy rather than stored as fat. Coconut oil is easy on your digestive system and does not produce an insulin spike in your bloodstream.

A Traditional Diet Might Not Guarantee You Perfect Oral Health

In the 1900s, Dr. Weston A. Price did extensive research on the link between oral health and physical diseases. He discovered that the most successful primitive groups health-wise were those who paid attention to and integrated beneficial ancient knowledge and dietary wisdom into their lives. The difference, Price reasoned, between primitive cultures who were healthy and those who were diseased came not from solely eating a traditional diet (as they all did), but in the accumulated wisdom enjoyed by certain populations, which allowed them to enjoy optimal health.

One of the keys to oral health is eating a traditional diet rich in fresh, unprocessed vegetables, nuts, and grass-fed meats that are in line with your genetic ancestry. However, as beneficial as that diet is to your dental and overall health, it might not be enough to guarantee perfect oral health.

We know, of course, that eating junk food and sugar certainly causes and worsens dental decay in humans, but there must be more to the story. There is evidence of tooth decay in ancient populations, long before there was exposure to refined sugar and white flour, as well as among wild animals today. Even some dolphins, which generally eat no carbohydrates whatsoever — only fish, squid, and crustaceans — have problems with tooth decay. Clearly, simply following a traditional diet is not enough to explain this phenomenon, or else there would be no dental decay in ancient peoples or wildlife.

In the past, I was also challenged with plaque accumulation which resulted in my having to make monthly visits to the dental hygienist. It seemed no amount of brushing, flossing, and even using a dental irrigator diminished this problem. However, in November of 2011, I was introduced to the first of two natural strategies that have significantly improved my plaque problem. The trick? Simply adding healthy amounts of high quality fermented vegetables to my diet.

Fermented vegetables are loaded with friendly flora that not only improve digestion but alter the flora in your mouth as well. Since the addition of these foods into my diet, my plaque has decreased by 50 percent and is much softer. I later further refined my approach by doing oil pulling with coconut oil and learning how to specifically target the primary source of plague, which is the junction of the tooth and gum surface by carefully directing my toothbrush at the appropriate angle.

The second technique I’ve been using for the past year is called “oil pulling” with coconut oil, which has reduced my plaque by another 50 percent, allowing me to go longer between visits to the hygienist. Oil pulling is a practice dating back thousands of years, having originated with Ayurvedic medicine. When oil pulling is combined with the antimicrobial power of coconut oil, you have one very powerful health tool.

Sesame oil is traditionally recommended, but it has relatively high concentration of omega-6 oils. Therefore, I believe coconut oil is far superior, and, in my mind, it tastes better. But from a mechanical and biophysical perspective, it is likely that both work.

Oil pulling is simple. Basically, it involves rinsing your mouth with coconut oil, much like you would with a mouthwash. The oil is “worked” around your mouth by pushing, pulling, and drawing it through your teeth for a period of 15 minutes. If you are obsessive like me you can go for 30-45 minutes. This process allows the oil to “pull out” bacteria, viruses, fungi and other debris. The best time is in the morning before eating breakfast, but it can be done at any time, the important point is to just do it. I seek to do it twice a day if my schedule allows. The used oil is discarded and your mouth rinsed with water. You should not swallow the oil because it’s loaded with bacteria and toxins.

When done correctly, oil pulling has a significant cleansing, detoxifying and healing effect.

Candida and Streptococcus are common residents in your mouth, and it’s these germs and their toxic waste products that cause plaque accumulation and tooth decay, in addition to secondary infections and chronic inflammation throughout your body. Oil pulling can help lessen the overall toxic burden on your immune system by preventing the spread of these organisms from your mouth to the rest of your body, by way of your bloodstream.

The potential benefits of oil pulling extend well beyond your mouth. Oil pullers have reported rapid relief from systemic health problems, such as arthritis, diabetes and heart disease. According to Bruce Fife, naturopathic physician and expert in the healing effects of coconut3, the cleansing effect of oil pulling can be understood with the following analogy: 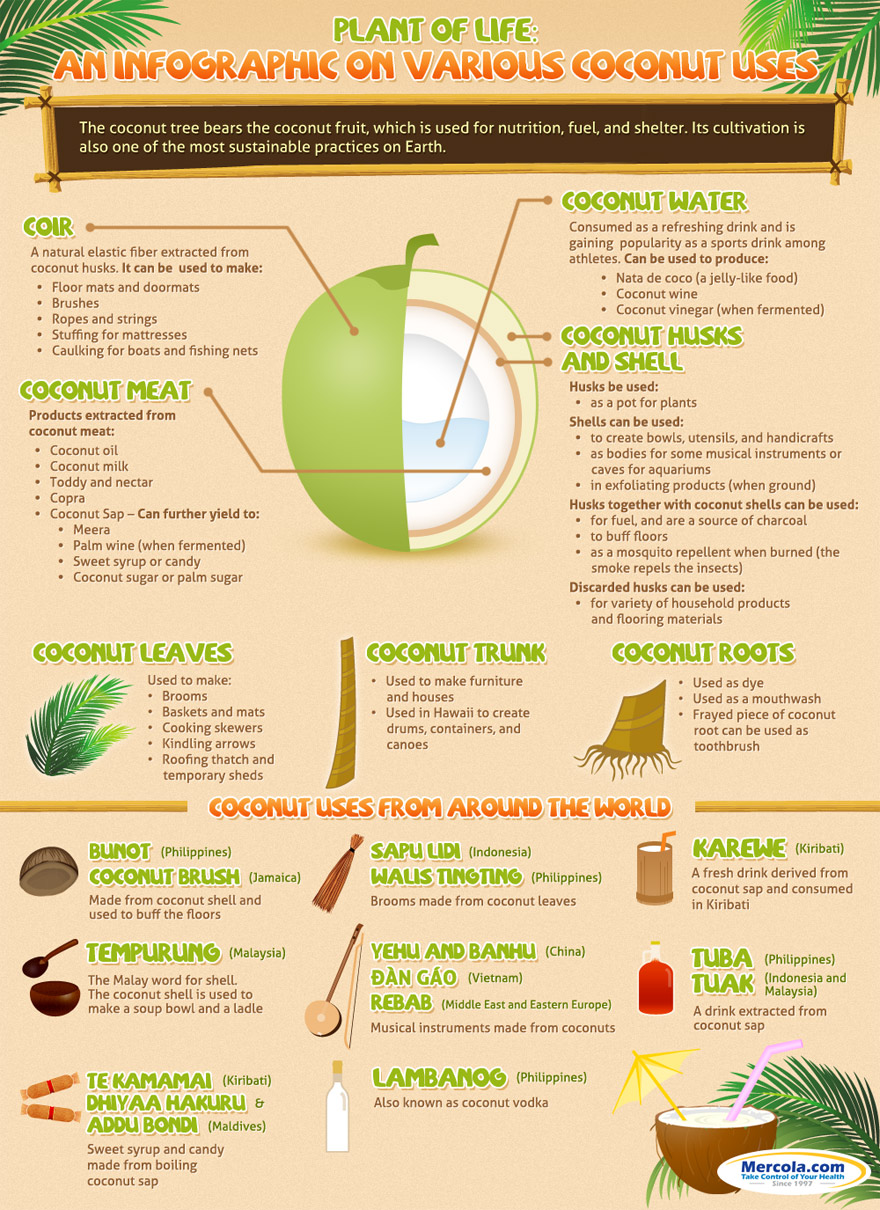 Learn how the coconut tree provides all-around benefits — from its husks and roots to coconut oil — through our infographic “Plant of Life: An Infographic on Various Coconut Uses.” Use the embed code to share it on your website.

How to choose a summer celebration. Carpe Diem

Almost every day celebrates something special for the rest of the summer, according to daily ...