Ever notice the hangover you get when you drink an extra glass or two of California wine?

The cause of that sick feeling and foggy thinking may be linked to Monsanto’s ROUNDUP, a toxic pesticide and probable carcinogen, that now is detected in CA wines, even those made with organic grapes.

Aligned with my philosophy to love food (and drink) that loves me back, I decided to exclusively drink wine produced in France, Italy, Spain, Australia, and South American countries that outlaw Monsanto’s toxic pesticides and GMO seeds.

What is the result of my experiment?

I consistently enjoy a glass or two of Roundup-free foreign wine without a headache, hangover or cloudy thinking that arise when your liver has to cleanse toxic Roundup from your body after you drink contaminated wine.

Read the study below and conduct your own experiment to avoid Roundup-contaminated wine and crops.  Let us know your results in the comment box below.

Monsanto’s Glyphosate Found in California Wines, Even Wines Made With Organic Grapes

Shortly after the release of a report showing 14 beers testing positive for glyphosate in Germany, a concerned supporter of Moms Across America approached me at a convention with disturbing news. He said he had test results from Microbe Inotech Lab of St.Louis showing 10 different wines, from large and small vineyards, contained the chemical glyphosate, the active ingredient in Monsanto’s Roundup weedkiller, including wine made with organic grapes. 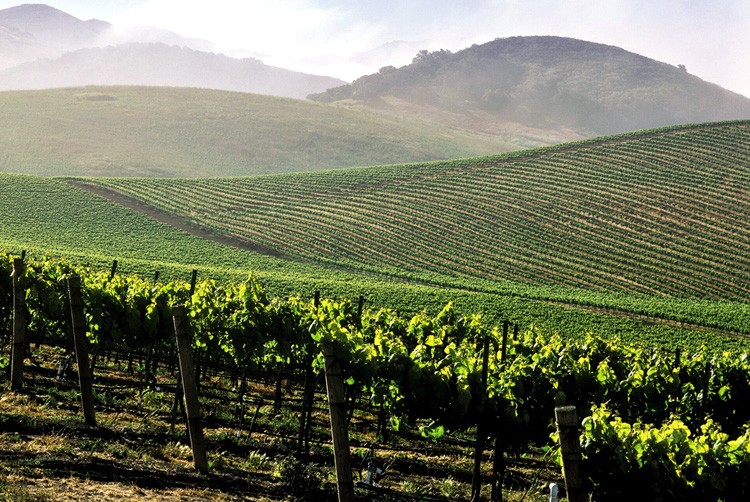 The wines tested came from Napa Valley, Sonoma and Mendocino counties in California. The brand names of the wines were not revealed, and frankly, the brands are not the issue. The real issue is the widespread contamination of glyphosate based herbicides in consumer products. 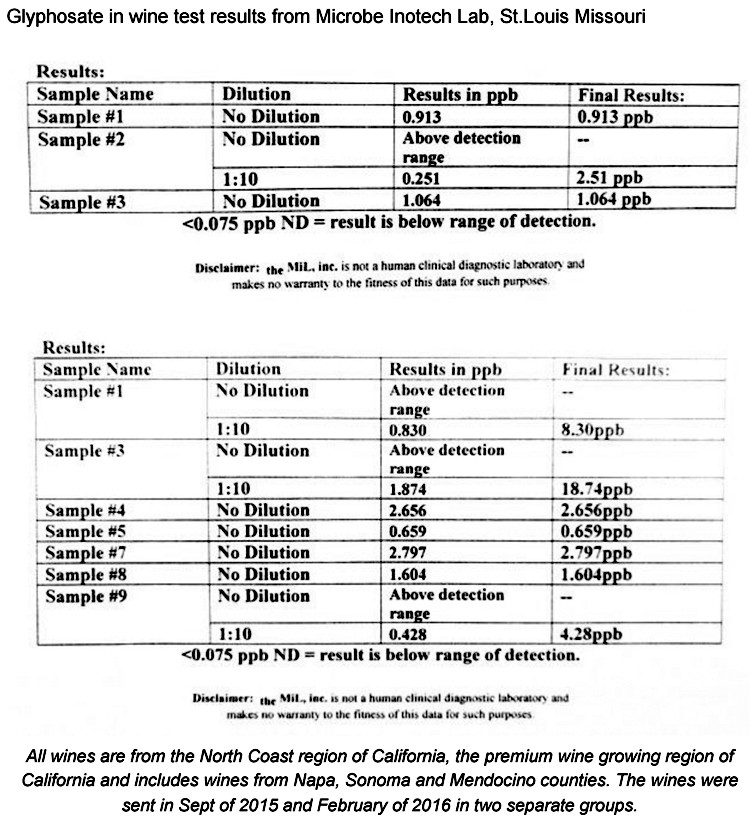 Here are my five reasons why Roundup/glyphosate should never be sprayed on any crops, including vineyards:

1. According to farmers like John Kempf of AdvancingEcoAg.com, glyphosate based herbicides are showing up in irrigation water, are likely present in manure/fertilizer from animals fed genetically modified grains and drift from spraying. Glyphosate residues have been detected in many foods, cotton products, breast milk, beers and wines.

2. Wine growers of conventional farms report that their family businesses use to be able to harvest from their vines for 100 years. Today, with chemical farming, vines are lasting 10-12 years. Glyphosate is a chelator, which makes the vital nutrients and minerals of any living thing it touches unavailable. Taking the risk of depleting the vitality of important crops is not a good long term decision for farmers of any kind. Instead, Regenerative agriculture enriches the soil, supports longevity of the farm and does not use toxic chemicals.

3. Glyphosate has been deemed a probable carcinogen by the World Health Organization. Even the small amount of 0.1ppt of glyphosate has been shown to stimulate the growth of breast cancer cells. According to the California Department of Health, breast cancer rates in the Sonoma, Napa and Mendocino counties are 10 to 20 percent higher than the national average. There are many pending lawsuits against Monsanto for the connection between non-Hodgkin’s lymphoma and Roundup.

4. The pig study by Pedersen and Krueger showed a repeated 30 percent increase of birth defects and stillborn with the introduction of glyphosate-sprayed grains. The infertility and sterility in America is exactly correlated to the pig study results, at 30 percent, the highest in recorded U.S. history.

5. French scientist Gilles-Éric Seralini and his team have discovered that the co-formulants of Roundup are 1,000 times more toxic than glyphosate and are hormone disruptors, which can lead to breast cancer, miscarriages, birth defects and many other health issues.

The survival of truth, justice and the American way of life is in jeopardy. That’s ...